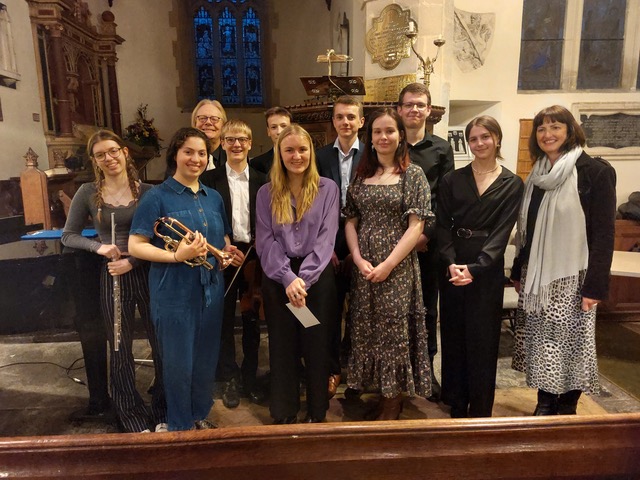 Churchill Music’s Young Musician of the year competition filled St. John’s church with musicians, parents, teachers and Champions of Churchill Music to hear the 9 talented musicians from Churchill Academy and Sixth Form Centre present and perform their 8-minute programmes to a thrilled audience.

The students had worked hard, and it showed.  The atmosphere was electric.  During the nail-biting, refreshment-consuming interval whilst the the judges adjourned to select the winner, the Raymond Hayter Song Prize, was awarded to the most promising vocal student nominated by Churchill Academy Music Department.  Presented by former Head of Music, Paul Harrison, this year it was awarded to soprano Borbola Gunyits.  Borbola won last year’s Ursula Dornton Vocal Prize and has earned a place to study at the Guild Hall school of Music and Drama.

Churchill Academy’s Chamber choir conducted by Jeff Spencer continued to transport us to the Blue Skies above with their wonderfully energetic entertainment until the judges returned.

This years panel chair of the panel, Richard Crabtree, Professor of Viola at Trinity Laban College of Music, London gave an inspiring, lively and informative adjudication panel to the instrumentalists.  Richard was assisted by soparano, Elizabeth Glen who gave the vocalists some good tips too.  Adrian Trapp Keyboard, strings and choral specialist was the third panel member.

Another uplifting evening which is testament to value of music in our schools which the charity Churchill Music works so hard to encourage throughout North Somerset.