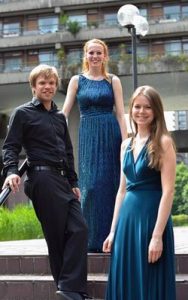 If you were unable to attend the recital given by the Cadran Trio on Saturday 29th April, you certainly missed a treat! Those present enjoyed playing of the highest standard in a programme which enabled the Trio to showcase a wide variety of musical styles, composed over two centuries from Haydn to Martinu, with Von Weber, Debussy and Villa-Lobos in between.

All three members of the Trio are now professional musicians with impressive performance track records, but the audience was amazed to learn that having joined forces to form the Trio, this was their debut public performance. On the evidence of their ensemble playing on Saturday, they have a great future ahead of them as the Cadran Trio.