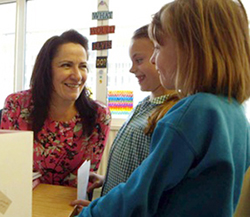 Churchill Music supporters will know that the trustees have long held a passionate belief in the value of music to children’s overall educational achievement. Thanks to both the incredibly generous donations from CM! Champions and funding from the National Lottery through Arts Council England, and the endorsement of leading international Education academics, they are close to realising their dream of creating a short film which demonstrates the benefits of children learning music as part of their generalist education

Filming is now complete and the footage is currently being edited in readiness for the voice over. Two primary schools feature in the film: Gallions Primary School in London where music has been at the core of everything they teach for nearly 20 years and Illminster Avenue E-ACT school in Knowle, Bristol, where the Head Teacher, Hilary Dunford took over the school in 2012 following its descent into Special Measures and eventual closure. Leading it to its ‘Good’ Ofsted rating in 2015 (and to what is hoped to be an ‘Outstanding’ rating next time), Hilary is a passionate advocate for the role of music within the curriculum. The school is supported by the ‘Preludes’ project which provides 4 specialist musicians who work with both the children and their teachers. Hilary commented “There has been a definite culture shift in this school about the way that we work as a team. We are a very close knit community of learners, teachers and children. One of the things that glues us together is music. I see every day the impact that music has on our children. The predecessor school was in special measures. We are now in the top 2 percent in the country for progress in reading, writing and maths in the combined measure.”

Leading academics within Education, Professor Sue Hallam, Institute of Education and Dr Anita Collins (see her TED ed talk ‘How Playing An Instrument Benefits Your Brain’ https://www.youtube.com/watch?v=ueqgenARzlE ), expressly endorsed the project and provided input to the video’s content. Dr Helen Odell-Miller OBE and her staff from Anglia Ruskin University who have given us insights into music education as well as support.

The CM! trustees fervently believe that the film, which is designed to be shown to teachers and education professionals as well as the general public via Youtube, will make a visually impactful and compelling case for the beneficial impact that learning to play a musical instrument ¬will have on children’s brain development. They are very excited at the prospect of being able to share the film with CM! supporters soon! Watch this space!